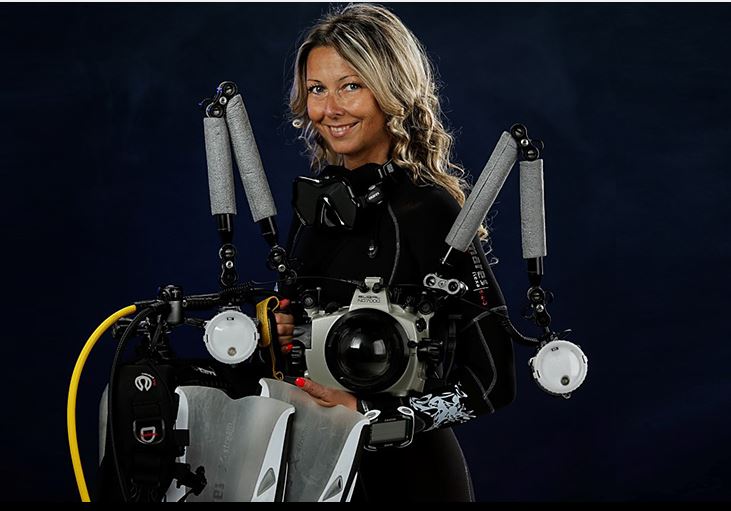 Born at the center of Balkan Peninsula in Belgrade, Serbia, hundreds of miles away from the seas it was almost incredible to foresee that Ivana Orlović Kranjc would chose to make sea her passion, home and a workplace.

She finished her first diving course at the age of eight and since then her commitment and her connection with the sea became greater and greater with each day. In the meantime she finished college and earned the degree in Marketing and Sales. She started with recreational diving followed byher first professional assignments, apnea competitions, she became diving instructor and it all culminated in the greatest passion for her of them all – underwater photography.

Diving expeditions took her all over the globe. She dove at the merging point of two oceans in South Africa accompanied by great white sharks, at surreal underwater locations in Maldives, explored caves in Bosnia for endemic Olm species, swam with whale sharks in Indian ocean, danced with Conger eels on island of Vis in Mediterranean Adriatic sea, submerged beneath frozen Alpine lakes, pet Morey eels in Red sea… And still so many more adventures to come.

Besides this adventuring part of her diving career, Ivana and her husband are owners and run the biggest diving club in Serbia – S.D.T. Svet Ronjenja which every year trains new generations of scuba divers. There is a constant education in underwater photography and apnea as well. Through this continuous education S.D.T. Svet Ronjenja attempts to raise questions of water pollution, constantly working on questions of ecology and nature preservation, because this planet will be home for many generations to come.

Last ten years Ivana has been dedicated to underwater photography. Everything started with disposable underwater camera, followed by compact cameras in underwater housings, and finally now in recent years with DSLRs. Today Ivana is using Nikon D7000 in Subal housing. Her specialities are underwater selfies with inhabitants of underwater world and her great split images. Her commitment and exceptional quality were recognized by American Underwater Products company which promote Ivana as their Oceanic Worldwide Ambassador since January 2015. April 2017 she became Mares Ambassador, one of the biggest brands in the world of diving.

“After all these years that I spent under the surface, I can’t imagine my dive without a camera. I think that underwater photography is the most powerful way to promote this amazing world to common people, non divers. I am certain that after they see my photographs that they will be more eager to come with us in our new adventures that lay beneath the surface of the water” – says Ivana Orlović Kranjc, underwater photographer.